Redirection is now being developed on Github. I’ve been running it there for a few months now and have already received several pull requests and fixes. It’s a good place for other people to contribute.

It’s also the best place to report any bugs or feature suggestions (anything sent to me by email tends to disappear into a black hole, and patrolling the WordPress.org forums is very time-consuming).

If you’d like to run with the latest version of the plugin then please do use the Github repo as the canonical ‘trunk’ version. The more people that do this, the less likely I am to release something that breaks sites.

I’ve yet to put a working git-to-SVN system together so I’ll manually sync things over to the WordPress.org SVN repository when ready for release.

I look forward to seeing how it develops!

Many people have contacted me to say that Redirection is broken with the latest versions of WordPress, outputting this message:

I’ve known about this for a long while, it’s a very easy fix, and in fact it’s been fixed for a long while – Redirection 2.3.2 has been available in SVN for many months. However, it was accompanied by some other structural changes in the plugin that may have actually, for real, broken things and so I’ve held off releasing it as a general update.

In the intervening time I’ve had my hands busy with other things, but have finally finished the release for public consumption, and the message is no more. Hurrah!

All this to say that if you nag me long enough I’ll eventually remember to do something.

For the pedants like me, it wasn’t actually broken – it’s a warning – and if you were seeing this on a production website then I’d very much advise disabling error messages.

While writing this release post I noticed that the plugin is over seven years old. Seven!

Noticed this on the Redirection plugin page: 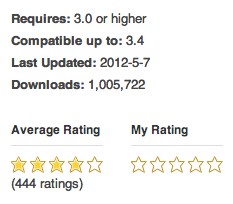 That’s over a million downloads. Crazy.

I’ve been tidying the plugin up a bit in 2.2.14, with the aim of simplifying things in 2.3 (available from SVN trunk). Give it a test if you have the time.

I’ve just committed a new version of Redirection to trunk on the WordPress.org plugin repository. This isn’t available for auto-download just yet as I want to make sure any problems are ironed out. If you’re a willing test subject then I’d very much appreciate any feedback. The code is running on this site and hasn’t melted anything (yet).

There is little visible difference between 2.2 and 2.1.29, but internally there has been a big cleanup. Large amounts of compatibility code has been cleared away, some of it going all the way back to WordPress 2.3. I’ve optimized the database where possible, and hopefully fixed the annoying bug that surfaced when WordPress 3.0 came out (automatically redirecting your home page is not so good!)

Anyway, the changelog for this version is as follows:

You can grab the new version from SVN:

If you have time there’s a short survey in the plugin that asks a few questions about how you use it. My aim is to simplify it and focus on the things people actually use, and the only way to do that is find out. You can also take part in the survey directly.

I’ve got a substantial update to Redirection just about finished off and ready for release. Rather than dropping this out and running the risk of upsetting a lot of websites, I’ve decided to try a private beta-test to iron out any final problems.

The new version gives much better management of redirections and error logging, and adds very powerful support for native Apache .htaccess files (i.e. you can use Redirection to edit .htaccess). If this sounds like something you want to help out with then drop me a line. The only requirement for this is that you are familiar with backing up and restoring your site database, or that you have a test WordPress site. The biggest help will be from people who are already using Redirection and have data to import into the new version.

Thanks in advance for any help!

Redirection 1.7.5 has been released and adds:

Redirection 1.7.3 has been released and adds: