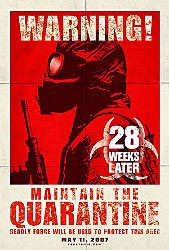 Like the original, the movie is aggressively shot and designed to put you right in the front of the blood-splattering action. Gore does exist, sometimes to an excruciating extent, so it’s not for the easily troubled. Other than that the movie has everything it should (including the obligatory shots of a damaged London), but overall it isn’t as effective as the original and you cannot help but be annoyed at people for doing exactly the thing you know they shouldn’t.

It’s always interesting to note disbelief about certain aspects of a movie, especially when the main story is fantastical in nature. People gloss over the technicalities of alien space travel, but complain about the sound of an explosion in space. I’ll attribute this down to human nature, and add one of my own. We are lead to believe that the American army is in full control of the clean-up and have rigorous security procedures in place in case of any possible outbreak. And yet, when a situation does develop, the security procedure seems to consist of locking all the disease-free people in a room, switching the lights off, and not bothering to check the outside door. This is a plot device I would gladly have seen removed.

The movie ends on a very dismal note without any of the originals optimism. Despite the sometimes awkward plot, and the occasional lack of anything happening, you are left with a sense of wanting to know what happens next. Danny Boyle has indicated that a 28 Months Later is planned, with himself returning as director. Hopefully then we’ll have a more satisfying conclusion.

If you like a bit of post-apocalyptic fury then 28 Weeks Later is one to check out, although make sure to watch 28 Days Later first to see how it should have been done.