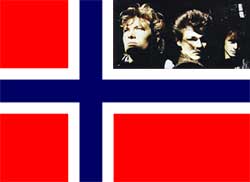 So I’ve had a few days experience of Oslo and my thoughts so far are:

Enough of the brevity. Oslo, and by extension I will include the whole of Norway, is a great place after three days. It seems a very modern, clean, and efficient city, and is a lot more multi-cultural than Prague. I’ve had almost no time to explore anything, other than taking part in a pub quiz with a Czech and two Norwegians. The quiz was in Norwegian and, unsurprisingly, we did pretty badly until the music round, which a portly gentleman from Liverpool presented in English.

One thing I found particularly interesting is learning about the local cultural differences. For example, I now understand more about the relationship between Norway and Sweden, and how young Swedes like to come to Norway after school so they can earn a lot of money. It reminds me of the yearly exodus between England and Australia, and a similar relationship between the Czech Republic and Slovakia.

Summer has disappeared now, and the air has turned crisp and autumnal. Hopefully the rains will stay clear at least until after the weekend.

In my previous post about Norway I completley forgot about the undisputed kings of Norwegian music: A-Ha. I was going to explain how great Kent were, but it seems they’re Swedish.