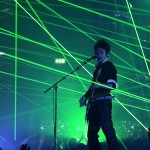 I wrote recently about catching the Muse concert in Hong Kong, and here I am on the other side of that, somewhat tired, but pleased nonetheless.

Hong Kong rocked far harder than I could have imagined, and it was good to see that alternative music is alive and well there. The Asiaworld Exposition Hall is a monstrous building just past Hong Kong Airport, and the industrial grey concrete seemed befitting.

After waiting far too long for the staff to get wired up (surely they could have sorted this out before the start), Muse descended onto the stage and immediately launched into the first half of their set. Chatty they are not, saying but a few words in Cantonese for the whole of the show. However, they worked incredibly hard and the music was perfectly crafted, with Matt Bellamy’s falsetto voice always reaching the tricky notes and his fingers never missing a key on the classical piano sections.

Alas I took no photos, but courtesy of the great internet I can refer you to a couple of wobbly YouTube recording:

It’s funny how the world works. Only the other day I was complaining to a friend about the lack of musical events here in Guangzhou (or, at least, musical events I’d want to listen to) and that if anyone did come over and play, someone such as Muse for example, I’d buy a ticket in a heartbeat. A couple of weeks later and I’m watching TV when an advert comes on for a concert… Muse are playing in Hong Kong – just two hours away. That’s close enough for my prophecy! It took more than a couple of heartbeats, but suffice to say that I’m already booked in and feeling pretty pleased.

According to the site I have this to look forward to:

Following 2003’s chart-topping masterpiece “Absolution”, the trio released their fifth and yet another UK number one album “Black Holes and Revelations” in July 2006. Hit singles include “Supermassive Black Hole” and “Starlight”: the former is a dance tune with a twist that sounds like a cross between Beck and Marilyn Manson with a dose of Studio 54 glamour while the latter is an Abba gig on the moon. “Knights of Cydonia”, a surf-prog number, is another favourite single taken from the album.

An Abba gig on the moon. Nice. Sure beats my ears bleeding from the more local Twins concert.

I’ve no idea what to expect from the concert itself. Hong Kong is not exactly known for it’s rock scene, and the concert itself is conspicuously on Lantau Island, far away from civilisation (next door is the airport). Admittedly this is because the Asiaworld Expo centre is located there (where the concert is playing), but I also suspect that Muse’s prog-rock warblings may cause a few puzzled looks if it neighboured any civilisation.