Recently I was invited along for a foot massage at a local spa. This industry is well established in China, and they’ve been practicing these treatments for thousand of years. While having my feet massaged (which for just under one pound was a bargain), one of my friends suggested I try Ba Guan treatment. They described it as something where glass jars are attached to the back, removing moisture from the flesh. There are many reasons why someone would have this done, one being that it helps people with a, for want of better word, dodgy stomach. Aha! Sounds great, I thought, I have that.

So I agreed to this treatment (it adding only another 60p to the total bill) and was ushered into a room where I was told to lay face down on a table and remove my shirt. A man came into the room with a tray of glass jars, each approximately twice as large as a light bulb. He ignited some cotton wool inside each jar, placing it on key acupuncture points on my back. The idea being that the cotton harmlessly burns away, creating a vacuum inside the jar, pulling the skin inside and thereby extracting whatever ‘badness’ it needs to.

Suffice to say that the glass jars pull your skin inside very tightly, and it feels very much like 10 or so small animals are clamped to your back, biting hard enough to make you very uncomfortable. From above you look like a Christmas tree.

Fifteen minutes later and the jars are removed, and you judge the necessity of such a procedure by how dark the marks on your back are. My friends varied from light to medium circles while mine were giant dark purple circles, giving my back the appearance of some kind of spotted lizard/leopard/alien. The effect is quite freakish, especially when viewed on yourself, and the marks remain for over a week. I’m generally not the type to show gratuitous amounts of flesh, especially not on the internet, but I feel a picture is worth more than I can ever explain: 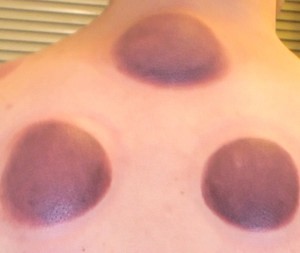 It’s hard to say whether the treatment had any beneficial effect or not. Apparently repeated treatments will result in much reduced colouration. Personally I found the foot massage a lot more relaxing.