Prague is being subjected to a minor heat-wave at the moment, and towards the end of last week it managed to break records, reaching around 38 degrees. Pretty hot and coupled with a high humidity it makes for very unpleasant and sticky days. Sleeping at night can also be difficult, partly because of the temperatures, but also because you need to leave open windows, and so invite all sorts of outdoor noises and bugs.

The noises are a side-effect of living in a narrow street with tall buildings on both sides. Even relatively quiet sounds echo upwards, and in the dead of the night everything just seems louder anyway. Of particular note are three Terrier dogs (currently residing near the bottom of my least-favourite-dogs list) that like to make themselves vocal, and an owner that doesn’t seem to mind.

The bugs have been more of a nuisance though. Usually I’m pretty much immune to bugs. They seem to ignore me, for whatever reason (bad blood and bad taste maybe), but over the weekend something had a royal feast on my back. Currently, judging by the marks, I’m suspecting a giant bat. It really makes you wonder what exactly is going on at night when you’re sleeping.

I’m reminded of a TV program I once watched, which involved an investigation into bed bugs in hotels. It showed how a perfectly normal looking bed can be host to an enormous number of tiny beasts that only come out at night. What was particularly surprising was the effect it can have on you – they weren’t just tiny spots, these were giant weeping sores, painful swellings, and all sorts of other nasty itchy marks.

I’ve refrained from showing documentary evidence here. Who knows what googling for it might reveal. 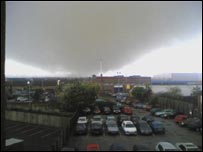 Anyway, returning to the weather theme, it seems that while we’re being baked here, back home in England they had a tornado. Yes, that’s right, a tornado. This is England, not the mid-west of America! At the same time I read about the weather in Hong Kong, where a storm of such intensity occurred that over 10,000 lightning bolts were recorded in one night. I wish I could find the original story as it had a nice picture, but boy… that’s one heck of a show.

All we need now is for snow to fall in India and we’ll be half-way through The Day After Tomorrow.