My last post was June 6th, and today it’s June 21st. In the time since then my hard drive had a spasm of identity, and I went back to England for a short holiday. Actually, both happened at the same time, which has left my computer pretty much incapacitated until I got back to Prague. Now I have the fun task of restoring its former glory. And they say computers are designed to make our lives easier.

While most of my work and emails were backed up, I had 10’s of gigs of photos and videos that were not, and not all of them survived. It’s quite disheartening really, as some were the only copies I had.

What was more disturbing was that after re-installing Windows, and before I could download a firewall and update Windows from Windows Update, my computer was infected with four different viruses/trojans. Now that’s scary, and makes me wonder at the state of the vast majority of the computer population.

Anyway, a large external hard drive was purchased and now an image of my entire computer is backed up, and not just a selection of files I deem important. I’m certainly not going through this again! Suffice to say that it will be a few days before everything is back up to speed and I can continue playing with WordPress.

To end this tale I’ll add a photo that demonstrates my feelings towards my computer after wasting several days of my life. 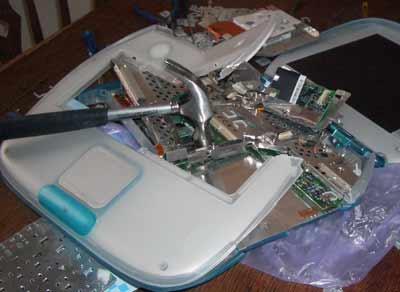