So what can be said about Apple’s latest product that hasn’t already been said in a thousand other reviews, and hasn’t been dissected in essays and dissertations across the world? Love them or hate them, Apple have managed to create a modern religion by fusing technology with style, and setting a price point high enough that it forces people to part with their money. People will, it seems, pay almost anything for something when it looks good, and when their friends have one. 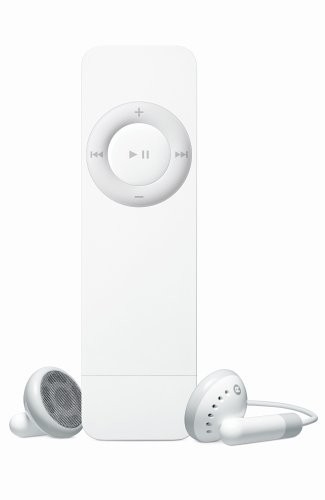 I have never been a fan of Apple, automatically steering away from anything resembling fanatical madness. When it came to choosing an MP3 player I went with an iRiver, rather than an iPod – it had better features and cost less. In fact, I still have and use my 20GB iRiver iHP-120. After almost a year of using a hard-drive based player I came to the conclusion that while it’s great to carry all my music with me, sometimes I just want something I don’t notice. To this end I investigated a selection of flash-based players and rapidly came to the conclusion that the Apple shuffle was not only the cheapest, but had twice as much memory as the nearest comparable product. This was a big shock.

Of course, nothing is ever perfect, and the most noticeable fact about the shuffle is its lack of LCD screen. In fact, the only feedback you get is from an LED on the front, and a tiny LED on the back. A lot of people will instantly dismiss the shuffle because of this, but LCD screens are only a recent addition, and we have managed to successfully listen to music without them. This isn’t to say we shouldn’t have one, but the shuffle has been firmly categorised by its lack of display and this is certainly a bold step.

Apple has another potential hit on their hands here. Not only does the iPod shuffle feature all the things that Apple are famous for, notably style and usability, but the cost firmly places it alongside cheap generic products. The legions of Apple fans are undoubtedly already sold, but the big question is whether they, and Apple themselves, can convince the rest of us that we don’t need to see what we are playing

One thought on “Apple iPod Shuffle”