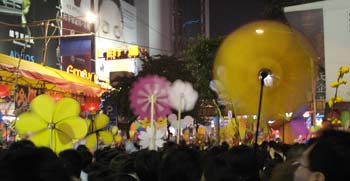 It was Chinese New Year a few weekends back and amongst the celebrations Guangzhou had its New Year Flower Fair. This is a local tradition going back over 500 years to the Ming Dynasty. I decided to check it out in the evening and went to one (of several) locations in the Beijing Road area of the city. 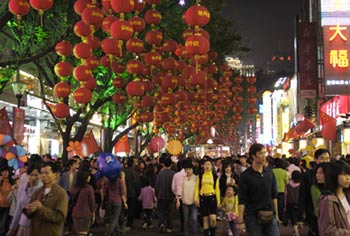 As is the nature of things here, the fair was colourful, noisy, and very crowded. Movement was made at a crawl, edging forward with the crowd in one direction, and back again in the other. Speakers from shops played traditional songs as loud as possible. Due to the bustle people with flowers were forced to carry them over their heads, leading to a surreal display of moving plants. Adding to this was that many of the flowers appeared to be small yellow inflatable pigs attached to long sticks. At first these looked like a plastic toy (much like the inflatable pigs people were carrying – it being the year of the pig), but it turns out that they are real plants.

Naturally I bought one. I’m not sure what to do with it, other than having it stand in a corner, but it’s certainly worthy of comment. From what I can tell it looks to be related to the bell pepper, or even tomato, as the ‘stick’ looks to be more of a vine. I’m sure it’s highly toxic, but other than a friend mentioning it represents family generations I’m at a loss as to what it actually is. Maybe some botanical-minded viewer may have some ideas?