I watched several movies over the weekend, courtesy of my flat mate making a bumper trip to the video rental store. His tastes could easily be described as eclectic – old romance, sci-fi, and Benny Hill are not an average choice.

Movie one was Woman Of The Year. This is a very old black and white movie starring Spencer Tracy and Katharine Hepburn and it falls squarely in the ‘romantic comedy’ category. Normally I make a quick retreat from such movies, but this was a lot of fun and certainly a lot better than most modern varieties.

What was particularly curious is how much society has changed with regards attitudes towards women. The basic premise of the story is that Hepburn is a modern wonder-woman; strong, intelligent, and beautiful. She speaks several languages, knows many important political figures, and soon wins the prize for ‘Woman of the year’. At the same time she meets Spencer Tracy and before long they get married. However, because of her busy life things start falling apart. She tries to patch it together by adopting an orphan boy, but it’s quickly apparent she has no time for him.

Despite all the many outdated attitudes in the movie, when you strip away the chauvinism you have a basic story about love, commitment, and priorities – subjects all too important even in these politically sensitive times.

The second movie was Star Wars Episode 2. Yes, a bit of a jump. I’d already seen it and my second viewing did not improve at all. Lucas needs his hands severely slapped. 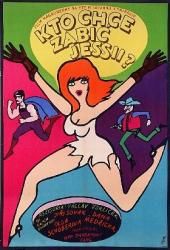 Finally there was a weird 1996 Czech movie called Kdo chce zabít Jessii (Who wants to kill Jessie). This was particularly surreal, even compared with the great Japanese movies. What makes it especially puzzling is that it was released during the Soviet occupation and while not political in any sense, is not what you imagine dropping out of the Soviet block.

The entire story revolves around a man who has a dream after reading a comic. His dream consists of a woman who looks like Raquel Welsh, and a superman and cowboy who chase her. Coincidently, the man’s wife is a scientist who invents a drug that is supposed to give you peaceful dreams, but actually turns a dream into real life.

As you would expect, the man takes this drug and the scantily-clad woman appears, along with the superman and the cowboy. So begins a Benny Hill style chase across Prague. Notable scenes of extreme weirdness are the dream of a cow, which involves sleeping in a hammock and listening to classical music, and the fact that the man and woman only share the same bed on a Thursday.